Through honest toil and kindness in Bo-Kaap, Souper gardeners plant seeds of hope that transform lives 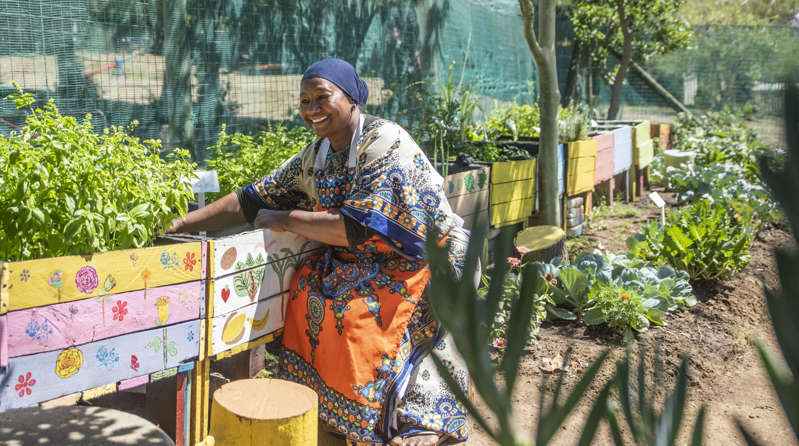 Souper Troopers have helped turn a Bo-Kaap garden back into a place where food and hope flourish.

Abieda Charles was nervous. A man she did not know was following her, albeit at a distance. He was tall and strong, and disconcertingly serious. She was relieved when she reached the doorstep of her home in the Bo-Kaap, Cape Town, without being accosted. But there he was behind her, tall and strong and serious.

“This is my house,” she said to the stranger, hoping that would scare him off.

“We can help you,” he said, his face melting into a broad smile.

Werner Goerke is 1.93m tall, strong, sometimes serious – and a newspaper reader. When he learnt from the Atlantic Sun about the plight of the Bo-Kaap Helpers, a non-profit group that manages a community garden in Upper Leeuwen Park, he knew something needed to be done. The park houses a playground and learning centre for young children, who use the garden for some of their lessons.

At the time the report appeared in December 2021, the garden had been burgled nine times, mostly for its equipment. Thieves had struck for the 10th time when Goerke followed Charles home. By then, not even the worm farms were safe. They had been smashed and their contents strewn across beds meant to grow food for all who need it.

Charles, a seasoned Bo-Kaap Helper, is a committed, spirited woman, but that sight snapped her resolve: “I didn’t come back to the garden for two-and-a-half months.”

Then Goerke arrived and clearly made a good impression. “Immediately, I knew this was help,” Charles said about her doorstep interaction. Goerke was confident about his offer because he wouldn’t be alone. “We can help you,” he had said.

Goerke is a beneficiary of Souper Troopers, which began in June 2014 from the boot of founder Kerry Hoffman’s car as an informal feeding scheme in the Company’s Garden. It has grown into one of the most respected organisations focused on improving the lives of Cape Town’s homeless residents.

Goerke knew he could count on himself and his fellow Troopers to turn the garden back into a space where food and hope flourished. And so they have. On a bright, breezy February morning, members of the Souper Squad – a 25-strong group of beneficiaries who have been vetted and employed by Souper Troopers with the help of funding from the City – met Charles at the garden’s gates. The day’s business was discussed, and the weeding, watering, planting and pruning was soon under way. That has been the routine, Monday to Thursday, since January.

No one seemed to tell anyone what to do. But things were done, and with care and enthusiasm. In a world that runs on ruthlessly transactional relationships, seeing people do their jobs – some of them arduous, like pushing a wheelbarrow filled with soil upward along a single row of bricks bordering a steep staircase – organically, efficiently and not under instruction, was therapeutic.

Out in the fresh air and warming sun, watching one form of life tend to another, it was impossible not to feel good.

Charles is touched by what she sees: “You learn about karma and what is ordained for you,” she said with shining, gently wet eyes beaming out from beneath her headscarf. “Because what has happened here was not just about the garden. It was also about me as a person…” She paused. “We cannot just hold on to the blessings. We must send them on.”

That philosophy is shared by Souper Troopers, and by their beneficiaries.

“Being part of Souper Troopers makes me think differently,” said Emile Lesch. “I can see that I’m doing better things than I used to. It’s better than stealing and robbing and walking up and down the street looking in rubbish bins. Here, we learn – to work, to respect each other, to be honest, to trust each other.

“It’s a process and a challenge, but they don’t give up on us. They want us to transform ourselves, but they’re giving us the guidelines to be able to do so. Everything takes time, but it’s working.”

Warda Adams, Lesch’s partner, is blessed with a warm, bright confidence. She said she finds fulfilment in taking care of the elderly and children, so she wasn’t sure she would take to gardening.

The way she wields a hosepipe, with as much authority as precision, says otherwise.

“If I was on the street right now I’d be thinking, ‘Which rigting [direction] am I going to go now – to go steal? To go pickpocket?’ But this is keeping me away from all those bad things and keeping me out of jail.”

It’s doing something else for Hans Moolman: “You’re reaping the blessings from working and being connected to the soil, but the word of mouth is spreading and the tannies are bringing things.”

Bo-Kaap Helpers now provide a cooked lunch for the Souper Squad on Thursdays. The squad’s honest toil is being recognised and rewarded.

“You don’t do it because of that,” Moolman said. “You do it because this is the task at hand. It’s amazing how it’s getting a life of its own. It’s a reminder of how we should be living, before we had financial imperatives that said, ‘I do this, you give me that’… Let me do something for you because I am, and somehow, without expecting it, it will come back to me in another way.”

Christopher Mupangila, whose eyes are as soft as his shoulders are broad, said: “In life, everything has to have a purpose. Every time you wake up you have to figure out what that purpose is, and Souper Troopers gives us a purpose… Being well received by the community gives us recognition for what we’re here to do.”