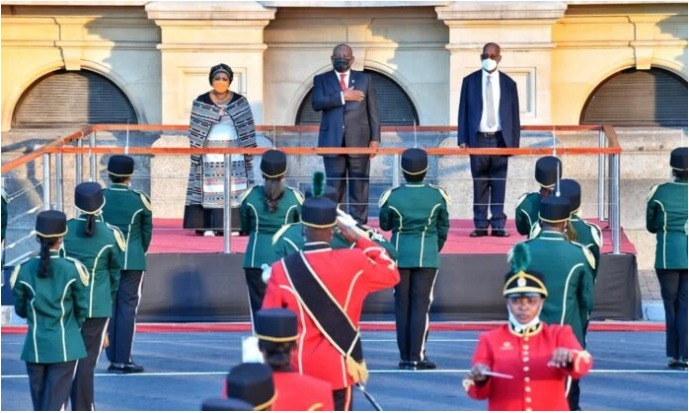 We all know that [the] government does not create jobs, businesses create jobs,” President Cyril Ramaphosa said on Thursday night. The sentiment received a mixed reaction from MPs and guests attending his State of the Nation Address (Sona).

Ramaphosa’s address underlined the role of the private sector in digging the country out of its growth slump, which has been characterised by a deepening unemployment crisis. In the third quarter of 2021, the unemployment rate hit 34.9% — the highest level since 2008.

Acknowledging the crisis, the president noted that Covid-19 “has exacerbated the divide between those who are employed and those who are unemployed”.

“Last year our unemployment rate reached its highest recorded level. Unemployment has been caused by low growth, which has resulted from the long-term decline in investment in our economy, which has lasted for a number of years.”

Ramaphosa said that the state “must create an environment in which the private sector can invest and unleash the dynamism of our economy”.

He later added that it is a key task of the government to create the conditions to enable the private sector: “And this is the case, whether we like it or not, all over the world. It is when [the] government creates that environment that will enable businesses — both small and big — to emerge, to grow, to access new markets, to create new products and to hire more employees.”

To this end, Ramaphosa announced that policymakers are reviewing the Business Act and other regulations to reduce the regulatory burden on businesses. The president has appointed a team, led by former Exxaro chief executive Sipho Nkosi, to cut red tape across the economy.

“We have found that there are too many regulations in our economy in our country that are unduly complicated, costly and difficult to comply with …. Now we are, therefore, working to improve the business environment for companies of all sizes through a dedicated capacity in the presidency to reduce red tape,” he said.

Nkosi, Ramaphosa said, has extensive experience in business. “He knows very well what red tape does to business and he will be working alongside officials to cut the red tape to enable our businesses to thrive and to grow.”

Ramaphosa announced that measures will be implemented to enable small and medium businesses to operate without as many constraints. This includes relooking at labour regulations to empower smaller businesses to employ more people.

A new loan scheme will be introduced to enable small businesses to bounce back from the onslaught of the pandemic and last July’s civil unrest, the president added.

The treasury, Ramaphosa said, is working with industry stakeholders to finalise the scheme and Finance Minister Enoch Godongwana will provide more details soon. Godongwana is set to give his maiden budget speech later this month.

Ramaphosa also underlined the importance of boosting infrastructure investment in the government’s efforts to spur growth. “Through innovative funding, and improved technical capabilities, we have prioritised infrastructure projects, to support economic growth and better livelihoods, especially in energy, roads and water management.”

The infrastructure fund, the president said, is at the centre of this effort. The fund has a R100-billion allocation from the fiscus and is now working with state entities to prepare pipeline projects with an investment value of about R96-billion. These projects include the building of student accommodation, social housing, telecommunications, water and sanitation, and transport.

Several projects, to the value of R21-billion, are expected to start construction in 2022, Ramaphosa said. Of these funds, R2.6-billion is contributed by government and the balance is financed by the private sector and development-funding institutions.