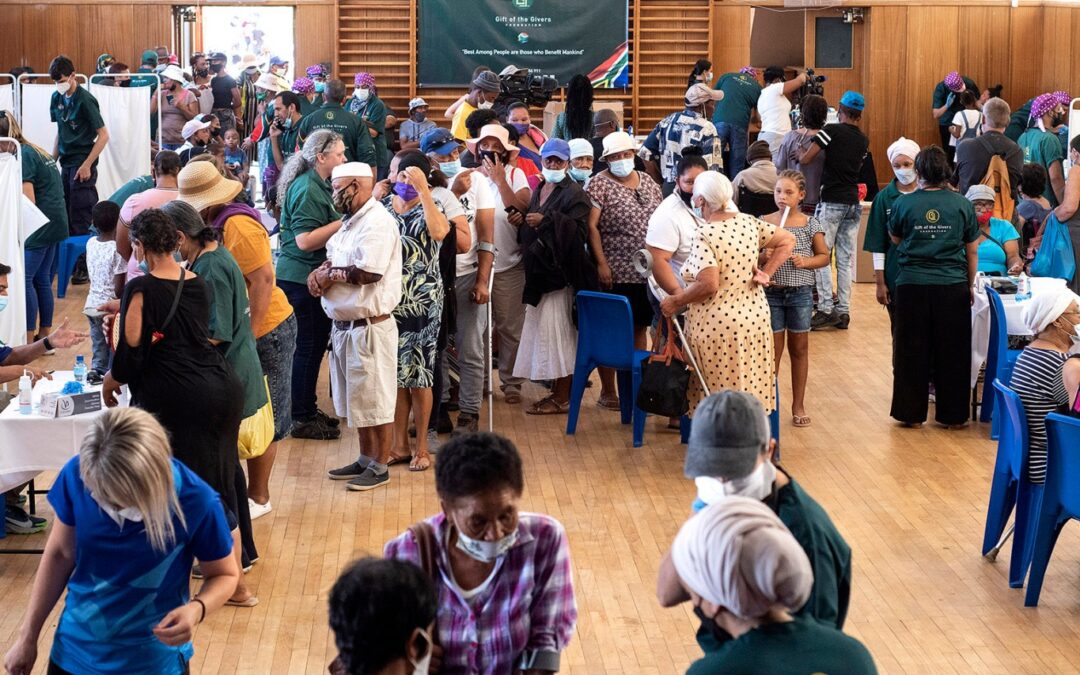 The rural town of Touws River, with its limited access to medical care and resources, is not unique to the area. Many surrounding farming towns and communities face similar struggles. A recent Gift of the Givers medical intervention sought to identify the prevailing health issues in Touws River, to ensure a better allocation of expertise and resources to the town. Daily Maverick spoke to medical practitioners involved in the intervention about which ailments need greater attention.

The Gift of the Givers medical intervention in Touws River (Touwsrivier) on 19 February 2022 sought to identify prevailing health issues in the town. Through sharing these findings with the Western Cape Health Department, the organisation aims to provide the government with the information necessary to identify areas of need and allocate appropriate resources.

The single clinic in the town, catering to around 10,000 residents, has only two doctors, each of whom visits once a week, according to Rashaad Baker, co-founder and chairperson of the Compassionate Hearts soup kitchen in the town. This means that they need to prioritise when seeing patients — a situation that leaves many ailments undiagnosed and untreated.

The situation is not unique to Touws River, with residents of surrounding areas such as Laingsburg, Matjiesfontein and De Doorns facing similar struggles, according to Baker. Members of these communities travelled to Touws River on the day of the intervention to gain access to medical care.

“I hope that this exercise and this intervention will put pressure on government to go and relook at their entire policy towards the rural areas, and especially where medical services are concerned,” said Baker. “Yes, we have other issues also, but medical services are important because that is what [determines whether] you live or die. And […] urgent intervention from their side is needed. Not tomorrow, but today.”

Maverick Citizen spoke to some of the medical professionals present at Saturday’s intervention, to find out which ailments need further attention among the residents of Touws River and the broader rural community.

Dentistry and dental care are areas that will require a significant increase in services in Touws River, according to Dr Naeem Kathrada, the head medical coordinator for Gift of the Givers in the Western Cape. The 12-person dental team saw close to 900 patients for tooth extractions at the medical intervention.

Apart from the immediate consequences of toothache, such as temperature sensitivity and facial swelling, there is the risk of infection getting to the throat, said Kathrada. Left untreated, a condition that can be easily addressed early on will result in patients seeking specialised care at hospitals.

For older patients, untreated toothache holds the risk of septicemia or other infections that affect the greater part of the body, according to Dr Ridhwaan Haffajee, a prosthodontist. While children, by comparison, are fairly resilient, they tend to be in an advanced stage of pain by the time they access extraction clinics like the one set up by Gift of the Givers.

“So, now their perception of oral health and the dental environment gets negatively impacted by situations like this,” said Haffajee. “I think it goes back to the old saying that prevention is better than cure, or early management is better than late management. So, I think the biggest thing with managing kids is not just the dental part, but it’s the psychological component towards their perception of dental care.”

“So, we’re going to be looking at speaking to [corporate partners] as well, as to something that can be a regular thing, once a month or once every two months. And then the communication between community leaders, the schools, churches, mosques, to then [spread] that information,” he said.

Kathrada confirmed that prevention is as important as treatment, not only when it comes to tooth care, but also for issues such as diet and exercise.

“It’s things we take for granted in the city, but out here people have never really heard about it, just because they haven’t been told about it and they don’t have the access. And that’s what we’re trying to do with this, do some educational systems as well,” he explained.

There were indications of food insecurity among a number of patients, both children and adults, who attended the medical intervention, according to Kendyll-Anne Boere, general practitioner (GP).

“[It] definitely is a problem. [F]or the kiddies, obviously, because when I’ve […] chatted to a few of the parents about what their diet is, it’s just not adequate,” said Boere. “I saw two kiddies with anaemia, so not getting a diet rich enough in iron and that sort of thing. And just, unfortunately, lacking in certain nutrients.”

The issue of underweight and malnourished children could be addressed through a better education around a healthy diet. Where possible, this needs to be coupled with better “health-seeking behaviour”, according to Boere.

“Unfortunately, in a community like this where healthcare is so scarce, you can’t really say, ‘You must go to the clinic before it gets this bad’ or ‘Don’t wait five months before’, […] but it sounds like they do have a mobile clinic or a clinic here. So, I think to just encourage better health-seeking behaviour, and that if something goes wrong, go rather too soon than too late,” said Boere.

Nerosha Laher, another GP, noted a high level of hypertension among patients. After arthralgia and arthritis, she estimated that it was the most common condition.

“[A] lot of them were actually undiagnosed, newly diagnosed for the first time, and elderly — like 60- to 70-year-olds — who have no idea they actually have [high] blood pressure,” said Laher. “And when you ask them, ‘Have you never checked?’, they go, ‘No, I actually haven’t been to the doctor.’”

Undiagnosed and untreated high blood pressure can lead to end-organ damage manifesting as strokes or heart attacks, among other conditions. It can also affect a person’s eyes, said Laher.

The need for ophthalmology

While the recent medical intervention team did not include ophthalmologists, a need for such a service was identified within the community. During the course of the day, about 42 people were identified as needing referrals to an ophthalmologist, according to Dr Lynne Hoole, who does remote and austere critical care.

Dr Imtiaz Sooliman noted the need for eye care in the community, adding that his team is already in contact with others who can provide the service.

“Dr Kathrada has spoken to somebody who’s got the contract for Western Cape Health, and they have mobile vans. They sort out eyes and they sort out the glasses at the same time, and they can see who requires cataract [surgery]. So, […] we’re talking to them right now, to see if they can come set up a clinic similar to this one, but specifically for eye-care only,” said Sooliman. DM/MC