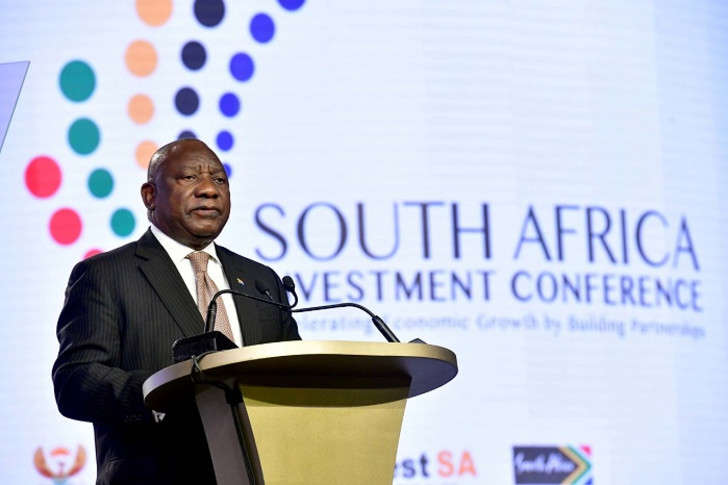 He was speaking at the fourth Investment Conference in Sandton on Thursday.

The platform was created in 2018 with the aim of showcasing new investment opportunities in the country.

The president said so far, two thirds of the target had been met since the conferences kicked off.

“Today, we are expected to add on leading up to R1.2 trillion that we want to raise over a five-year period, and we think we are going to meet our target and even exceed it. South Africa is a very hot investment destination, with the presence of business of up to 40 countries here just goes to prove that we are still a desired investment destination.”

Meanwhile, business leaders have implored others in the private sector to support the government in its efforts to rebuild the country’s battered economy.

Speaking at the conference, leaders of some of the country’s leading companies, such as Anglo American’s outgoing CEO Mark Cutifani, called on business to speak “responsibly” and be a part of the solution.

Some of the country’s leading CEOs have not held back on their criticism of government in recent months as grand plans to reform the economy remain unimplemented.

While on any other occasion, business leaders speak frankly about the challenges they face in the spaces where they operate, the investment conference is a forum where they put their differences with the government aside and punt the country.

This year’s gathering is no different as some economists described the event as nothing but a “charade”.

Cutifani’s sentiments about supporting the government were echoed by Naspers CEO Phuti-Mahanyele Dabengwa: “What we found is that in working closely with government, it really helps us a lot. I mean, just yesterday, I was engaging with the deputy minister of higher education, and you know that type of collaboration is really great in being able to formulate solutions that are helpful, it’s in having private sector and public sector organisations working together.”

At the beginning of March, Sibanye-Stillwater’s CEO Neal Froneman told an online publication that he viewed South Africa as a failed state due to lack of leadership.