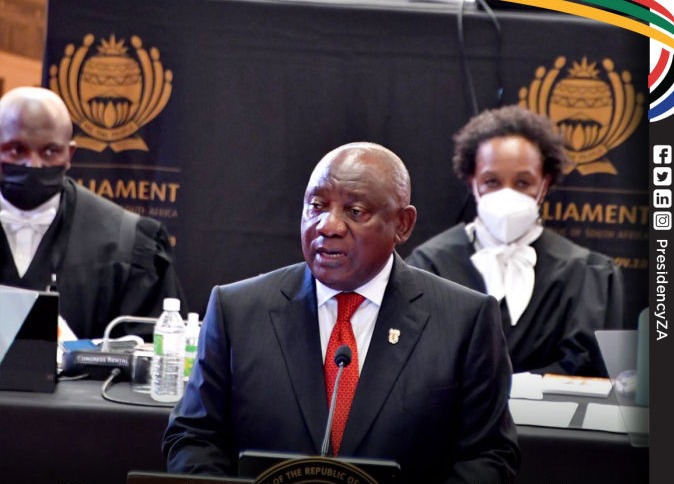 Corruption and state security were high on the priority list as the address followed the release of parts of the State Capture Report and an expert panel’s report on the July unrest.

There were also demands for Ramaphosa to tackle other pressing issues like rising joblessness and the need for a basic income grant.

The President launched into his address by saying the January fire at Parliament was symbolic not only of the devastation caused by the Covid-19 pandemic, but of the July looting and other endemic ills plaguing the country.

The President said that it is his intention to end the National State of Disaster “as soon as we finalise other measures under the National Health Act as well as other legislation to manage and contain the pandemic”.

He also announced that the R350 Covid- or Social Relief of Distress grant will be extended for another year, until March 2023.

It remains government’s ambition to establish a minimum level of support for those in greatest need, he added.

Any future support must pass the test of affordability, and must not come at the expense of basic services or at the risk of unsustainable spending… During this time, we will engage in broad consultations and detailed technical work to identify the best options to replace this grant.

President Ramaphosa gave details of the social compact being worked on to achieve what he called “a new consensus” to address unemployment, poverty and inequality in South Africa.

He emphasized the role of the private sector in creating jobs, with government creating an environment conducive to this.

We gave ourselves 100 days to implement a comprehensive social compact to create jobs as well as fight hunger and no one must be left behind.

Ramaphosa noted how the electricity crisis is disrupting business and adding strain to South African households.

He said several renewable energy projects will be coming on to the grid in the next 2 years, including 300MW from gas and battery projects.

The unbundling of Eskom is expected to be completed by September this year.

The President also promised that government is working hard to minimise the red tape that is holding back local entrepreneurs as well as investors.

The President emphasized the importance of growing the economy and expanding jobs.

Addressing corruption, Ramaphosa said the Zondo Commission report made it clear that “there was indeed state capture“.

He gave the assurance that government would be strengthening protection for whistleblowers, as recommended in the report.

I have every confidence that the NPA will carry out the further investigations that the Commission has recommended, and that it will bring the members of the criminal network that infiltrated government and captured the state swiftly to justice.