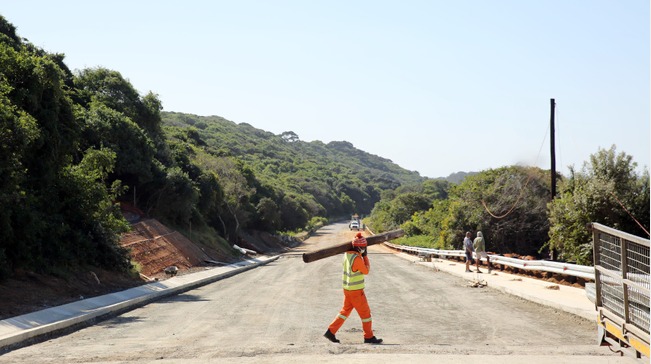 The national lockdowns have adversely affected capital investment, contributing to years of sliding infrastructure investment in the country. The government’s Economic Reconstruction and Recovery Plan identifies infrastructure development as critical to speeding up economic growth. National Treasury, the Infrastructure Fund and Infrastructure South Africa have initiatives to improve the scale, speed and efficiency of infrastructure spending. This has mainly involved creating a pipeline of projects, doing project appraisal, and attracting private-sector participation and financing.

Godongwana said yesterday that 62 priority infrastructure projects were gazetted last year. An additional 55 new projects valued at around R595bn, with a funding gap of around R 441bn, were also recently unveiled.

More than R340bn of funding has already been committed from the private sector since May 2020, when the first 62 infrastructure projects were announced.

Economist Dr Roelof Botha said these new projects, the financing already received for the earlier projects, and the expanded public works programme, indicated the likelihood of a surge in construction activity next year if interest rates did not rise.

The government’s goal, as outlined in the National Development Plan, is that infrastructure comprise nearly 30 percent of gross fixed capital formation by 2030, but by the first quarter of 2021 this figure was only 14 percent, following a 13 year decline since 2008.

Godongwana said government would maintain its commitment to the Infrastructure Fund, including allocating R100bn over a decade from 2019/20, as committed to in the previous budget.

“Further work is being done to unlock more infrastructure projects for execution. There is strong collaboration with government departments and other institutions such as Infrastructure South Africa and the Development Bank of Southern Africa to prepare four projects with an investment value of R84.5 billion in the telecommunications, water and sanitation as well as the transport sectors,” he said.

MTBPS documents showed that over the next three years, general government infrastructure investment was estimated to be R500bn. The R100bn committed by the government to the Infrastructure Fund was to leverage private sector and development finance, with R24bn allocated towards this over the 2022 MTBPS period.

Meanwhile, National Treasury completed a review of the public-private partnerships framework in May 2021, and policy changes based on recommendations from the review would be announced in the 2022 Budget.

National Treasury said private fixed capital investment had been slow to recover from the lows of 2020 due to weak confidence and demand, and persistent structural constraints such as inadequate electricity supply, while government investment had continued to decline.