President Cyril Ramaphosa to address the nation amid unrest 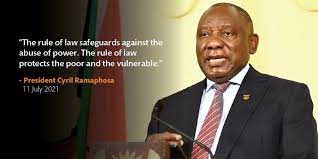 Monday, 12 July 2021 – President Cyril Ramaphosa is expected to address the nation on Monday.

This will be his second consecutive announcement after he updated South Africans about the state’s Covid-19 response.

In a statement, The Presidency says Monday’s address will speak to the “government’s response to persistent public violence in parts of the country. The exact time of the President’s address will be announced shortly”.

“The address will follow the announcement by the South African National Defence Force that it has commenced with pre-deployment processes and procedures in line with a request for assistance received from the National Joint Operational & Intelligence Structure.

“The request entails SANDF support for police operations in parts of KwaZulu-Natal and Gauteng.”

The Presidency is yet to confirm the time of the address.

Constitutionally, the head of state has the powers to deploy the nation’s soldiers in cooperation with the police service and must inform Parliament of such an action.

This follows violent protests in KwaZulu-Natal (KZN) – which have spilled over to Gauteng.

Over the past few days, protesters have been on a looting spree, destroying critical infrastructure as well as torching properties and vehicles.

The protests are alleged to be linked with the Zuma protests where his supporters want him to be released from prison after he was sentenced to 15 months in jail for being in contempt of court.

During Sunday’s address, Ramaphosa warned that the instigators of the violent protests and looting would be brought to book.

“Let us be clear, as a nation, that we will not tolerate acts of criminality.

“Those who are involved in acts of violence will be arrested and prosecuted,” he said.

“In the past few days, we have seen sporadic but increasingly violent protests in some parts of the country.

“Key infrastructure like national roads have been affected, slowing down the transportation of goods and services that keep our economy running.

“Property has been destroyed. Cars have been stoned. People have been intimidated and threatened, and some have even been hurt.”

The president noted the constitutional right of citizens to protest but that it should be done peacefully.

“These acts are endangering lives and damaging our efforts to rebuild the economy.

“Our Constitution guarantees everyone’s right to freely express themselves and to engage in peaceful protest.”