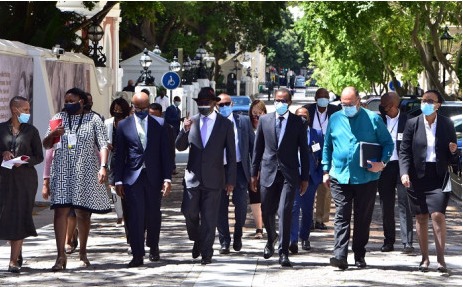 Finance Minister Enoch Godongwana said there needs to be economic reform, but has cited better economic growth for this year with the country recovering from the effects of the COVID-19 pandemic.

CAPE TOWN – Finance Minister Enoch Godongwana said there needed to be economic reform, but has cited better economic growth for this year with the country recovering from the effects of the COVID-19 pandemic.

He went on to say COVID-19 vaccinations were vital to keeping up the momentum.

“The strength of the South African economy recovery will also depend on rollout of vaccines. A higher take up of vaccines will reduce the risk of future waves of the pandemic.”

Godongwana said electricity supply problems were also stopping growth and this was being dealt with.

“Instead of securing supply of adding additional capacity to the grid, we have already made significant progress in correcting this: the amendment of Schedule 2 of the Electricity Regulation Act of 2006, has raised the licensing threshold from 1 to 100 megawatts,” he said.

Godongwana said private producers would help with this.

He said: “The 25 projects that are part of the latest round of Bid Window 5, will generate more than 2,500 megawatts of power at a weighted average price of 47.3 cents per kilowatt hour.”

MUNICIPALITIES ARE A FISCAL RISK

Godongwana said R450 billion would be allocated to municipalities over the medium term and they had worked out a plan to address the 43 municipalities that were in a financial crisis.

On the provincial front, government plans to dole out R2 trillion in transfers over the medium term so provinces can deliver education, health, and social services.

However, Godongwana said there needed to be economic reform.