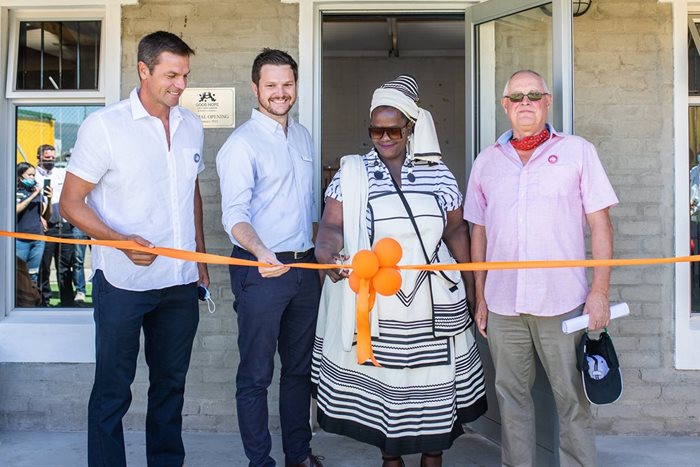 On Thursday, 20 January, the brand new Good Hope Day Care Centre (GHDCC) in Mbekweni near Paarl was officially opened by Valcare, giving more than 20 vulnerable children with special needs now the opportunity to reach their full potential in a new, bigger and better environment.

This is a dream come true for Xoliswa Mjezu, who opened GHDCC seven years ago when she realised that there were no special needs centres in the entire Mbekweni, with a population of 60,000 people, that could look after her autistic daughter.

Using the skills she acquired while volunteering at the Paarl Stimulation Centre and her Level 4 and Level 5 qualification in Early Childhood Development, Mjezu has been effectively running the centre with passion and resourcefulness from her tiny government home, but the challenges have been debilitating.

“The children did not have enough space to develop properly – it was heartbreaking to see. I could only accommodate a few children, and had a long waiting list. Today, I am so happy that there is a proper building and structure in place to support more children, much better. We can only go forward from here,” says Mjezu, who serves as centre manager.

The centre is built on the Hope Through Action Foundation grounds next to the Mbekweni Community Sport Centre. This creates a safe community hub where the GHDCC, Nompumelelo Educare Centre and Mbekweni Sport Centre will share resources like security, electricity and meals, a move that will save costs and create a culture of collaboration.

The new GHDCC is equipped with features that make the space conducive for learning and playing for children with special needs. The building has a bathroom with six toilets, four wash basins and one wheelchair-friendly toilet, a kitchenette, office space for Mjevu, diaper changing room, a one-on-one facilitation and rehab room, a large class room as well as an outdoor synthetic grass play area.

Businesses open their hearts to make centre a reality

Work on building the new centre started in August 2021 after multiple stakeholders from the Cape Winelands came on board to partner in the project, either by donating funds, time, services or goods in kind.

Over R1.1m in financial donations were received from eight different funders which includes the Val de Vie Foundation, who raised the initial R650,000 to kick-start the project.

Most of the service providers were so moved by Xoliswa’s story that they worked completely pro bono, or gave significantly reduced fees without earning any profit. Over R200,000 worth of service in kind and goods in kind donations were received.

“It is encouraging to see the collective effort in action. It was not just one person who funded this project, but multiple people who stepped up to help in their own way. Good Hope Day Care Centre has the potential to make a real impact in the lives of the children in Mbekweni and this new building is a step in the right direction,” says Ivan Swartz, CEO of Valcare.

All of the suppliers and service providers were sourced from the region, adding to the economic benefit of the locals.

Three local tradesmen, who are a few streets away from GHDCC, were commissioned to do all of the burglar bars, paving and tiling, and a further 21 community members from Mbekweni received temporary job opportunities by offering services like painting, cleaning, trenching and forming part of the security team.

Nine other businesses from Paarl and Wellington – including Medipost, The Pure Legacy Foundation, KWV, Mulligan and Pure Legacy – also contributed to the project

The Department of Social Development has started a process to assess the building specifications, thereafter they will issue a certificate that will open GHDCC up to receive government grants, ensuring the sustainability of the centre going forward.

Alderman Conrad Poole, executive mayor of the Drakenstein Municipality, said he was impressed by this project and that it definitely deserves the support of everybody. “These children are vulnerable and they need all the love and care in the world. Thank you to everybody involved in this project. This definitely is a great example of ubuntu.

“It is not only the government’s duty to look after our children, but it is of critical importance that the private sector and non-governmental organisations work together to make the world a better place for them,” Poole said.