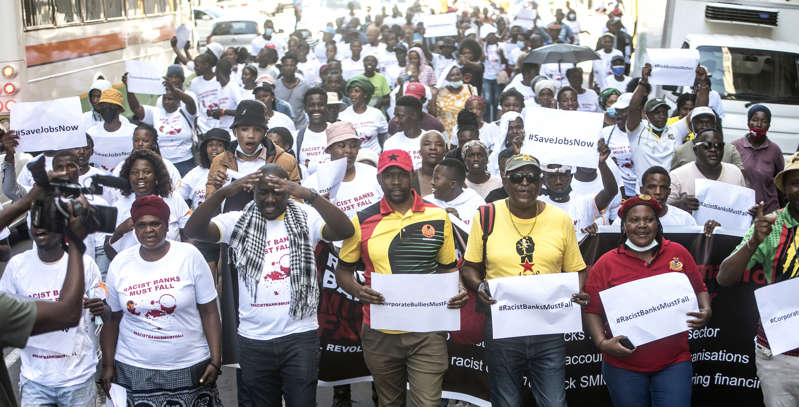 On Thursday, a group of about 150 people marched to the Western Cape High Court to protest against racism in the banking sector. But some were under the impression that they were headed to a youth debate at Parliament.
“Did you know this was a march?” asked a perplexed 20-year-old from Gugulethu, who was under the impression that he was headed to a parliamentary debate on youth unemployment on Thursday morning.

Instead, the 20-year old had unknowingly joined a march to the Western Cape High Court against “racist banks”. A poster circulated in a Khayelitsha youth entrepreneurship WhatsApp group called on “young entrepreneurs to join our class action against the South African banking sector”.

The poster called for the release of business loans, an end to racial profiling of black businesses, an end to corporate bullying and for racist banks to fall.

The 20-year-old, who asked not to be named, finished Grade 12 in 2020 and has been struggling to find work.

He also refused to have his photo taken “because it will seem like I want to be here; I don’t want to be here. I was misled and if I had known that this was a march, I wouldn’t have come.”

“Even when I got here, I said to one of the organisers that this looks like a march and he insisted that it’s not and that we’re going to Parliament.”

The 20-year-old was among about 150 unemployed or out-of-school people who joined the march.

Mandilakhe, who asked for his last name not to be used, said that on Wednesday he was asked by his cousin to get people to attend today’s march.

Mandilakhe then posted on Facebook: “Anyone unemployed or not studying. DM urgently from Nyanga or Gugulethu.”

In his next post, Mandilakhe said that people needed to bring their IDs and that they needed to wear comfortable clothes. Mandilakhe’s Facebook post, which Daily Maverick has seen, was unclear what would be happening. Nevertheless, people reached out to him.

Silas Rataza, an organiser of the march and a community activist from Stellenbosch, said he wasn’t sure why people would be confused about the day’s activities because he told the crowd the aim of the march before they began.

Rataza announced before the march that it was in solidarity with the Sekunjalo Group. “We want to say to the court to think about the people employed [by Sekunjalo] who stand to lose their jobs. If they lose their jobs, they’ll be unable to provide for their families, which will affect the children and the living conditions in the home. We also want the [banking] sector to be transformed [because] it doesn’t have space for black people,” he said.

Kwanda Nontsele, a community activist from Gugulethu and an organiser of the march, said that there had been confusion and that the youth debate would happen at a later stage.

“Before they came to the march, we rectified the issue and told them about today there wouldn’t be any youth debate. We said to them that today is the march against racism from banks. Perhaps they didn’t have data or they weren’t paying attention when we told them about today’s march,” Nontsele told Daily Maverick.

Nolubabalo Sillie from Khayelitsha said that she came to the march to speak out about the ways that black people were discriminated against by the banking sector.

“We’re here to ask why they’re closing down the bank accounts of black people. Is it racism? If it’s not, then they should stop doing it,” said Sillie.

The crowd marched and sang on the way to the Western Cape High Court, where they were met by about a dozen SAPS members with shields.

Ludwe, a 19-year-old from Khayelitsha who refused to give his last name,  said that his friend had invited him to the march.

“He just said there’s a march, ‘Let’s go, there’ll be transport and food’. I didn’t ask what exactly the march was about,” said Ludwe.

Most of the young people at the march seemed reluctant to speak and, if they did, they appeared uncomfortable about giving their full names.

The march took place on the same day that Iqbal Survé’s Sekunjalo Investments’ urgent interdict was being heard in the Equality Court.

Survé is the chair of Sekunjalo Investments, a private equity firm that is invested in more than 30 companies, among them Independent Media, African Equity Empowerment Investments, AYO Technology Solutions and Premier Fishing & Brands.

Other banks – including Nedbank, Standard Bank, Investec, Mercantile and Sasfin – have followed in Absa’s footsteps by either reviewing their banking relationships with Sekunjalo and its entities or completely terminating them.

Sekunjalo wants to interdict Nedbank from closing its bank accounts.

IOL reported that “the bank’s systematic closing of the Group companies’ bank accounts threatens about 8,500 employees and indirectly over 40,000 livelihoods and has been described by financial academics, industry commentators, among others, as an attack on transformation”. DM