Fed-up SA citizens take to the streets, blaming foreigners for crime and the unemployment crisis 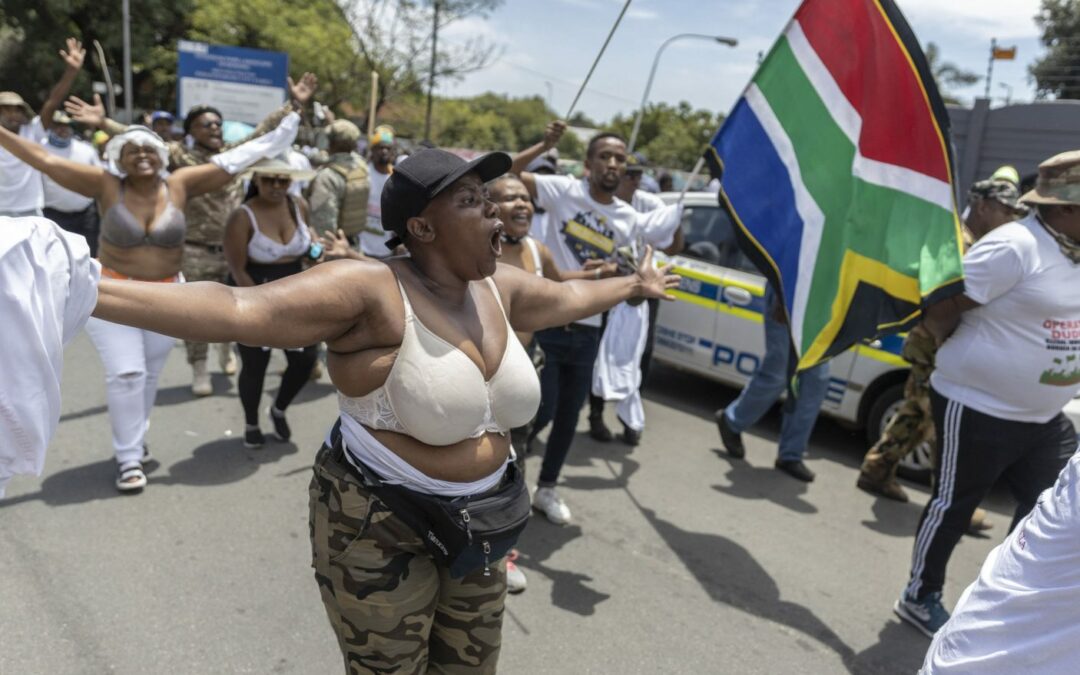 Most South Africans do not tolerate violence against non-South Africans, but the number who do is growing – including many of our politicians.

Nhlanhla Lux Dlamini, known as Nhlanhla Lux, is credited for saving Maponya Mall when violence and looting flared across KwaZulu-Natal and Gauteng after former president Jacob Zuma’s arrest in July 2021. Maponya Mall is the biggest mall in Soweto.

Lux and a group of armed Soweto residents in military fatigues camped outside the mall for days, facing and returning gunfire until army and police reinforcements eventually arrived. Lux took on a hero-like status and was given a national platform to comment on a wide range of issues. Weeks before the defence of Maponya, Lux’s movement, Operation Dudula, marched to remove “illegal” foreigners by force.

Operation Dudula clashed with police in Hillbrow and Orange Grove in Johannesburg last week, and marched again this past weekend against foreigners, who it claims are responsible for human trafficking, drug dealing and taking local business opportunities. The movement is part of a recurring series of xenophobic attacks that could flare up again as foreigners are blamed for crime and unemployment and politicians use xenophobic rhetoric to mask their own failures.

Operation Dudula launched in June 2021 and appears to act as a kind of operational arm of Lux’s other movement, Soweto Parliament. In isiZulu, “dudula” means “to push” or sometimes “to bulldoze”. Lux claims the group isn’t xenophobic and also targets lawless South Africans but he has repeatedly blamed foreigners for the country’s problems and inspired the sort of vigilante action that made him famous.

Lux has claimed that his group always acts in conjunction with law enforcement and, before police fired teargas and stun grenades to disperse Operation Dudula in Hillbrow last weekend, SAPS appeared to have tolerated the group. DM168 witnessed police watching when supporters sjambokked a suspected drug dealer in Baghdad, Diepkloof, an area known for crime. Gauteng Police Commissioner Elias Mawela this week disputed claims that SAPS was working with the group.

Last month, Lux’s group raided the Baragwanath Taxi Rank in Diepkloof, demanding that undocumented informal traders and those without permits leave immediately. The Socio-Economic Rights Institute condemned the “unlawful, discriminatory, and politically motivated conduct orchestrated by some political parties under the pretext of protecting employment for vulnerable South Africans”.

Operation Dudula has led to more attacks. Lux’s group was formed at least in conversation with an anti-foreigner group in Alexandra, the Dudula Movement. The two groups appear to have fallen out, with Lux describing the Alexandra group as criminals.

The Dudula Movement was inactive but has decided to revive operations. It’s now implementing “operation fiela”, named after the police and army response to xenophobia in 2015, an operation which itself was criticised for targeting foreigners rather than xenophobes.

The Dudula Movement targeted foreigners in Alexandra last weekend, while Lux’s Operation Dudula was marching in Hillbrow. “We tell them to pack their stock and leave,” said Dudula Movement spokesperson Agnes Malatji.

Abigail Ncube, a Zimbabwean who has been a street vendor in Alexandra for 18 years, said Dudula Movement supporters arrived at the weekend and knocked over stalls near the Pan Africa Shopping Centre. She immediately thought of the 2008 violence.

“I couldn’t hide or escape… Before I could even respond if I have the documentation or permission to sell from here I am told I am not allowed and should stop immediately and get the next bus to Zimbabwe,” said Ncube.

Mozambican Sylvia Tembe wasn’t at work when the group arrived but she lives close by and saw what happened. She questioned the logic of targeting informal traders, who have tried and failed to get formal employment. “Even if we don’t get hired by companies and create our own jobs by selling, they still fight with us.”

Joao Mariano, from Mozambique, said the Dudula Movement recently visited his shack and wrote down words in South African languages, demanding he read them. When he struggled, they said they would return. “They said they don’t want to find me when they come back in a few days.”

Operation Dudula is the latest and most significant movement targeting black foreigners in what appears to be a constant cycle of scapegoating and violence, which could be increasing as political leaders try to divert attention from their own failures and the devastating economic consequences of Covid-19.

Pointing the finger at foreigners is a powerful tool for bolstering your own political fortunes. With the smackdown the ANC took at the last election and other parties smelling blood, political competition is real. And with little left in the Treasury and few programmatic ideas, all the parties are jumping on the anti-immigrant bandwagon.

Ahead of last year’s municipal elections, Patriotic Alliance leader Gayton McKenzie promised to target “illegal” foreigners and “build walls like Donald Trump”. The party’s vote grew significantly in the elections and McKenzie recently visited the City of Johannesburg’s offices to demand the removal of foreign staff.

Former Johannesburg mayor Herman Mashaba has repeatedly made misleading comments linking foreigners to crime and his ActionSA party was one of the success stories of the elections. EFF leader Julius Malema, a staunch defender of Pan-Africanism, joined the foray, visiting a number of restaurants to “inspect” employment ratios between locals and migrants. But he has denounced Lux and Operation Dudula as “thugs”, “harassing innocent people”.

A number of ANC leaders have also used xenophobic tropes about foreigners taking jobs, suggesting the hospitality industry in particular needs further regulation. Home Affairs Minister Aaron Motsoaledi wants to pass legislation introducing quotas on how many foreigners a company can employ. As health minister, he regularly blamed the poor state of the health system on migrants.

The apparent normalising of xenophobic rhetoric follows years of attacks on foreigners, dating back even before the widespread 2008 violence. Recently, the disbanded MKMVA led attacks on foreigners in Durban and foreign truck drivers have been targeted and killed in KwaZulu-Natal and Gauteng.

Dr Steven Gordon from the Human Sciences Research Council (HSRC) said surveys show a majority of South Africans do not tolerate violence against immigrants, but the high number of people who support violence is worrying.

In the HSRC’s 2019 South African Social Attitudes Survey, about one million adults admitted they had committed a violent act against international migrants in the previous year. About 10 million said they hadn’t committed violence against foreigners but they would be prepared to take part.

Gordon’s research shows that more South Africans are framing the immigration issue in zero-sum terms: the idea that one group’s gain is another’s loss.

He found that about a third of South Africans believe that, when foreigners succeed in accessing resources, locals lose out. He compared public opinion research from the beginning of 2020 to the end of the year and found significantly less opposition to zero-sum thinking.

Professor Loren Landau from the migration and development unit at the University of Oxford and Wits University’s African Centre for Migration and Society, is part of Xenowatch, which monitors xenophobic discrimination in South Africa.

“What is important to recognise is that the attacks have never stopped. If you look at our Xenowatch data, attacks and threats have remained relatively consistent. What we see is occasional peaks above the norm. And in this regard, there are acute threats,” he said.

“Whether it is Operation Dudula, the EFF’s vigilante labour inspections, or any number of other actors, violence is a real possibility. Most worryingly, with officials regularly making anti-immigrant statements, it is unclear who in government is in a position to call for calm or restore reason.”

“Although the national political leadership has not yet figured out how to deliver jobs or services to millions of South Africans, it has learned its lessons from the 2008 attacks,” he said.

“Pointing the finger at foreigners is a powerful tool for bolstering your own political fortunes. With the smackdown the ANC took at the last election and other parties smelling blood, political competition is real. And with little left in the Treasury and few programmatic ideas, all the parties are jumping on the anti-immigrant bandwagon.”

Xenophobic attacks are fundamentally criminal and the authorities could limit the influence of local leaders by holding them accountable. That would, however, require a functional law enforcement and judicial system, as well as political will.

“It may not be possible to prevent a repeat of attacks. The violence we have seen in the past is increasingly imbricated with township and now national politics,” said Landau.