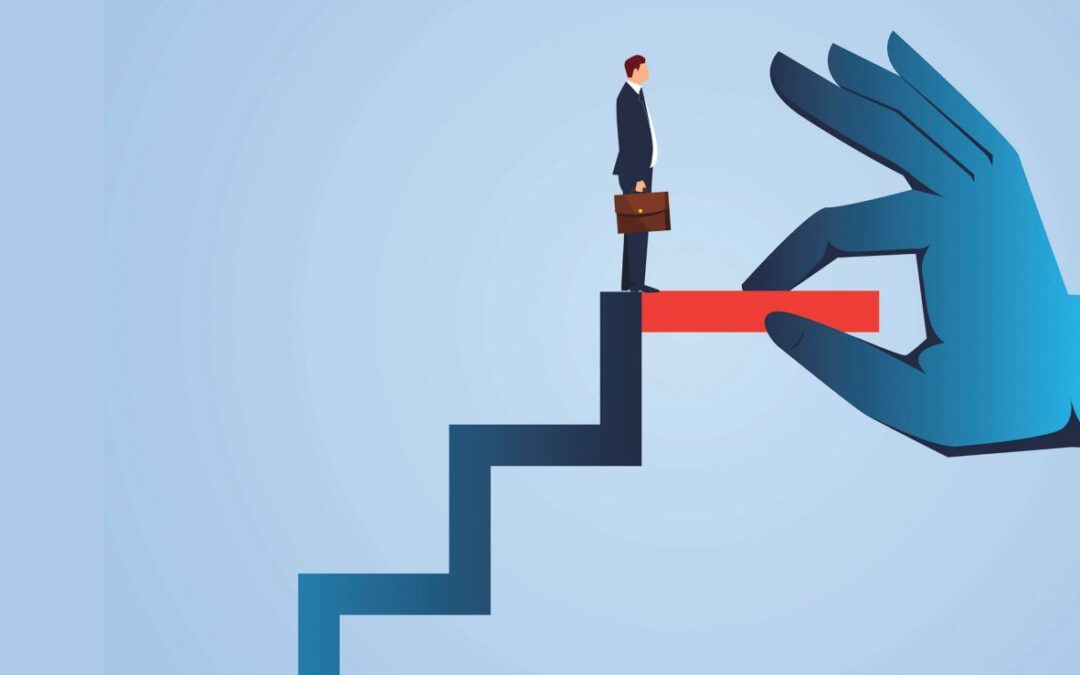 The same script is playing out across South Africa as 7.6 million people – about 13% of the population – are unemployed. Include discouraged jobseekers, and the number of unemployed people swells to more than 11 million, comprising mostly young or working-age people.

Ayanda* received her qualification as an artisan three years ago from a technical college and the 28-year-old has since been doggedly looking for a job without any success. South Africa reportedly has a shortage of artisans and the country, in some instances, has been forced to import technical skills that are simply not available locally. Despite this, Ayanda struggles to find an entry point into the country’s technical labour market to gain work experience as an artisan – experience she could use later to gain meaningful employment.

“I have lost count of how many companies I have approached over the past three years, asking them for a job. I have even asked companies for volunteering opportunities, working for free, so that I can gain technical experience,” the Meadowlands, Soweto, resident tells DM168.

Another problem is that mega-infrastructure and construction projects have dried up in recent years as the country’s economy has become weak and uncompetitive, resulting in less work being available for artisan hopefuls such as Ayanda.

“People don’t often talk about how depressing and demoralising the job search process is. I put a lot of effort into looking for a job and I am not even guaranteed a reward in the end. It’s expensive to be unemployed. It requires money to travel to job interviews, call companies about potential vacancies, print and submit my CV copies,” says Ayanda.

The same script is playing out across South Africa as 7.6 million people – about 13% of the population – are unemployed. Include discouraged jobseekers, and the number of unemployed people swells to more than 11 million, comprising mostly young or working-age people.

Presidents over the past 14 years have battled to fix the unemployment crisis. At the end of the commodity supercycle in 2008 during Thabo Mbeki’s administration, the official unemployment rate dropped to 22%. The rate started rising from 2009 during Jacob Zuma’s presidency, which was defined by populist policies, excessive government spending and widescale corruption. When Zuma quit as the president in February 2018, the jobless rate shot up to 26.7%. And now an unemployment rate of 34.9%, worsened by the Covid-19 pandemic, hangs around President Cyril Ramaphosa’s neck like an albatross.

Warming up to big business

Ramaphosa realises that his administration is failing to make a dent in the stubborn unemployment numbers, which also feed poverty and inequality. In his State of the Nation Address (Sona) on 10 February, Ramaphosa made a concession that has probably made him more unpopular with his ANC colleagues about how the unemployment crisis can be fixed. “We all know that [the] government does not create jobs,” Ramaphosa conceded during the Sona. “Business creates jobs.”

Ramaphosa’s statement is a big shift in how the ANC views its role in the broader economy and labour market. The party (and by extension, the people it deploys to the government) believes in the state’s intervention in and ownership of all spheres of the economy and sees itself as a major job creator. But conventional wisdom has it that the government’s role, through policies, is to create an enabling environment that makes it easier for businesses to do business, unleash investments and, in turn, grow the economy and create jobs.

This is why some commentators, like political analyst Moeletsi Mbeki, view Ramaphosa’s concession through a cynical and critical lens. “For a president of South Africa to give us elementary and high school economics is shocking. South Africa is a capitalist country and the country’s capital creates jobs. He’s a billionaire and should know this,” says Mbeki.

“The ANC is looking for excuses for the failures of its policies over the past 27 democratic years. It wants to now pass the buck of job creation to the private sector and make it the scapegoat for when it doesn’t deliver jobs.” After all, politics will shape everything – from economic policies to job creation – in 2022 because Ramaphosa is hoping to secure a second term as the ANC president at the party’s upcoming elective conference.

Three weeks before his Sona, Ramaphosa met with big business, which has become impatient with his glacial pace of implementing pro-growth and investment policies since his election as the President in 2019. At the meeting, business executives warned Ramaphosa that South Africa is running out of time to turn its worrying situation around, and urged him to accept the private sector’s help to create jobs and reform the economy.

“We emphasised to Ramaphosa at the meeting that business creates jobs,” says Bonang Mohale, the president of Business Unity South Africa (Busa), a business lobby group. “South Africa is running out of options, and when you are out of options, you have to become realistic and pragmatic.”

Mohale and other prominent business executives told Ramaphosa that jobs for the millions of poor South Africans will only come from the implementation and acceleration of structural economic reforms. These reforms are designed to change/modernise the fabric of an economy and the regulatory framework in which businesses and people operate. They target network industries, including electricity, water, transport and digital communications, as these are essential to restoring competitiveness and unlocking investments and confidence, so that the country’s potential growth remains above 3% in the long term.

Where will the jobs come from?

Jobs won’t come from state-owned enterprises (SOEs), despite the government’s adoption of a developmental state model in 2003 in which SOEs and their large capital budgets were targeted by the government for jobs and growth-inducing infrastructure projects.

Instead, most SOEs, including Eskom, Transnet, SAA, SA Express, Land Bank, SA Express, Denel and others, have either cut jobs to reduce their bloated remuneration budgets or are not embarking on a recruitment drive because they face financial problems.

The public sector is also embarking on cost-saving initiatives such as issuing retrenchment notices and asking public servants to take early retirement packages because the government wants to cut the public sector wage bill, which will be a whopping R665.2-billion in 2022/23.

Large industries that are crucial for South Africa’s economic development such as mining, manufacturing and construction are either cutting jobs in response to a weak domestic economy or freezing new vacancies until the operating environment is more certain. The private sector, mainly the services and retail industries, seems to be opening the door for job seekers.

Ramaphosa has known for a long time about the changes that are needed to fix the economy and create jobs. For example, during his ANC presidential election campaign in 2017, big business rallied around him not only with capital but also with private sector skills and capacity. A plan was drafted by business executives, researchers and economists, which detailed how Ramaphosa can reform the economy if he emerged successful in the ANC election race. The plan was premised on private-public sector partnerships.

Ramaphosa won the presidential campaign (both ANC and state) but he has been too slow on implementing the necessary reforms. His structural reform momentum is only starting to pick up now and notching up a few wins – nearly four years into his state presidency. These include amending the Electricity Regulation Act to pave the way for private players to generate and sell electricity (lessening the public’s dependence on Eskom); auctioning of radio frequency spectrum to mobile operators from 7 March 2022; revamping the e-visa system; and publishing a new critical skills list to attract foreign expertise into the country.

Says Busa’s Mohale: “Going forward, the focus has to be on monitoring the implementation and delivery of these reforms. Organised business will intensify its efforts on this front. Business knows how to deliver projects on time and on budget. There is no other social partner than business that can do it. New industries will emerge from these reforms and jobs will be created.”

Long road ahead for job creation

The uncomfortable reality is that reforms don’t deliver benefits such as economic growth and jobs overnight.

In fact, economies tend to struggle in the early years of reforms being implemented because tough decisions relating to economic policies are taken and past practices are done away with. Dr Lumkile Mondi, the senior lecturer in Wits University’s School of Economics and Finance, argues that reform measures can take between three and five years before measurable benefits can be achieved. “The sad reality is that unemployment is here to stay for a long time and we can never escape it until the reforms start to lead to tangible benefits,” says Mondi.

The unemployment problem in South Africa is further complicated by other structural factors and faster economic growth alone won’t eradicate the crisis. Millions of South Africans are either unskilled or have the wrong skills for a modern economy, are not educated enough and live far away from job opportunities.

The danger of faster economic growth is that it will bypass many people who don’t have skills, further entrenching inequality levels. On the bright side, Mondi says economic growth normally enlarges the government’s tax revenue (in a growth scenario, companies pay higher taxes on their profits), allowing the government to respond better to service delivery and the needs of society, momentarily lessening the effects of unemployment. But for this to happen, a capable state is needed – a state that is prudent with managing finances and isn’t corrupt, the antithesis of South Africa.

The labour movement is not convinced about Ramaphosa cosying up to big business. Labour, at least Cosatu, believes that job creation cannot be left to business alone, saying the government shouldn’t pare down the degree of its ownership and intervention in the economy.

Matthew Parks, the parliamentary coordinator for Cosatu, says the labour federation still believes in the developmental model in which the government uses investments by SOEs to create jobs. “SOEs provide electricity, run freight rail and the ports, run passenger rail, provide roads, deliver water and sanitation. These are key to growing the economy. They cannot be left to the private sector, which is focused on profits, not eradicating poverty,” Parks tells DM168.

Parks says additional government resources should be allocated to Eskom and Transnet to fix their financial and operational crisis. He also argues that the government should use its procurement muscle and budget (of nearly R1-trillion every year) to create jobs by supporting small businesses. The government is a big procurer of services and goods, everything from stationery to catering. Cosatu wants a portion of this budget to be channelled to small, medium and micro enterprises (SMMEs), the drivers of employment in the country.

But Parks has not written off the role of the private sector. “The banks need to do more to support SMMEs [through funding solutions], to ease the pressures on consumers and support productive investments. We need many young people to also be job creators and get involved in entrepreneurship.” DM168