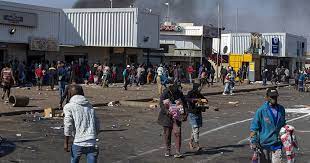 The recent political and social unrest across parts of South Africa has again brought to the fore the deep structural problems faced by the nation. These include high levels of poverty for an upper-middle income country, largely due to extreme income inequality, which means that a large segment of the population is much poorer than the average, and massive unemployment.

Hunger is another feature of South Africa’s inequality that has become pertinent in the current socio-political climate. Hunger is of course subjective, but questions on hunger are widely used in short surveys to measure respondents’ food situation. Many commentators have pointed to this as one of the underlying causes of the unrest. We do not propose that hunger is the cause of the current social upheaval. But, taken along with other deep-rooted structural inequalities, it provides additional fuel for socio-political conflagration.

We have recently investigated hunger in the time of Covid-19 as part of the National Income Dynamics Study – Coronavirus Rapid Mobile Survey (Nids-Cram). This nationally representative panel survey of 7,000 South Africans aimed to provide rapid data on key outcomes such as unemployment, household income, child hunger and access to government grants.

Our research appeared as a working paper based on the survey released in early July. Our findings suggest that hunger and food insecurity – the disruption of food intake or eating patterns because of lack of money and other resources – have increased in South Africa due to the pandemic. In 2019, just before the outbreak, a national household survey found that 11% of households had gone hungry in the past year. The most recent Nids-Cram survey showed that 15% of respondents experienced this in the week before they were interviewed.

This increase followed a period of nearly 20 years during which hunger levels declined. The introduction of the child support grant in 1998 was a major reason why South Africa made progress. Data for the period 2002 to 2019 showed a halving of hunger among children as well as adults.

But while hunger had declined, food quality remained a major problem. This is evident from the fact that stunting remained higher.

While the rollout of the child support grant and moderate economic growth caused the decline in hunger in the early 2000s, this decline slowed after the 2008 financial recession.

The economic shock caused by the pandemic and lockdowns changed the situation dramatically and reversed the decline. Moreover, the Nids-Cram surveys showed that hunger now appears to have stabilised at new levels.

This gave researchers a perspective on changing circumstances at a time of great volatility. The survey filled a specific need for up-to-date and nationally representative data to inform the policy process, at a time of crisis.

The panel survey attempted to reach the same respondents on five occasions. The first set of interviews was in May and June 2020, shortly after a hard lockdown was implemented.

In all five surveys, we found levels of hunger to be higher than before the first lockdown.

Initially, during the first set of interview, many respondents indicated that they had run out of money for food, yet hunger affected fewer households. This may indicate that some households managed to make ends meet in some way, at least to ease hunger. We found some improvement in the second period of data collection in July and August, after the first hard lockdown had ended. This was because of the partial economic recovery, top-ups of existing social grants, and the introduction of the new Social Relief of Distress grant and Temporary Employer-Employee Relief Scheme.

But these positive effects did not last.

As the figure below shows, food insecurity in terms of not having enough money for food has declined since the first lockdown. It was considerably lower in March 2021 than in April 2020. The initial strong decline was also mirrored in both household and child hunger.

This was likely the effect of some improvement in the economy, and also government’s decision to top up the grants, the introduction of new grants and other measures to provide support.

In more recent interviews of our study, there has been a decline in households running out of money for food – but no decline in hunger levels.

In an attempt to manage government debt as well as the need to prioritise public health spending, the government began the staggered phasing out of emergency social assistance and social insurance from October 2020.

By the end of April 2021, all forms of emergency assistance had ceased. Social grant increases that were below inflation in April 2021 also eroded their value. This was coupled with declining levels of food relief for poor households provided by government, NGOs and community support systems.

The National School Nutrition Programme has not been operational in many parts of the country. This weakened the safety net. Millions of people were left destitute while unemployment was rising.

Despite the small monetary value of the Social Relief of Distress grant (R350 or about $24 a month), it expanded temporary access to close to 6 million unemployed people who were not eligible for unemployment benefits and the Temporary Employer-Employee Relief Scheme. These benefits ceased at the end of April 2021.

Researchers estimate that without the special distress relief grant over the past 12 months, poverty would have been 5% higher among the poorest households and income inequality would have been between 1.3% and 6.3% higher. Moreover, the grant increased the likelihood of searching for a job by 25 percentage points.

These underlying factors might explain much of the frustration that is being expressed in communities across the country. It also shows that social protection and emergency assistance can have important stabilising effects on families and communities.

Without these measures, hunger would undoubtedly have been worse, with potential long-term consequences for children’s development and for social cohesion.

Grace Bridgman, a PhD candidate at Stellenbosch University focusing on spatial inequality, child hunger and development economics, was part of the research team.

This article is republished from The Conversation under a Creative Commons license. Read the original article.