Campaigners launch The Real Jobs Summit ahead of budget speech 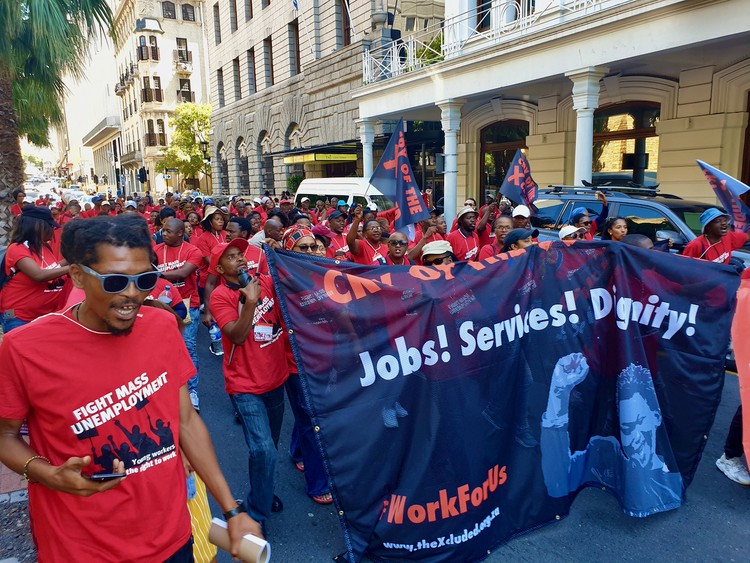 On Sunday participants in the campaign staged a performance of a play at the V&A Waterfront amphitheatre about unemployment, climate change and domestic violence. The play was staged without the permission of the Waterfront management. The campaign is supported by the South African Federation of Trade Unions (SAFTU), Association of Mineworkers and Construction Union (AMCU) and the Assembly of the Unemployed (AoU). It is also supported by the Alternative Information & Development Centre (AIDC), Reclaim the City and #UniteBehind, and the Progressive Community Movement from Khayelitsha.

Opening the summit at St George’s Cathedral, the campaign’s Madoda Cuphe told supporters: “This summit is for the people who feel they have been excluded from society because of unemployment.”

Even according to StatsSA’s very limited unemployment definition, over 6.5 million South Africans are unemployed.

Supporters came from across the country.

Asemahle Gqozo, 22, completed Grade 12 in 2017 and did tertiary studies in Tourism Management. She says she can’t find a job.

“I live in Town Two in Khayelitsha with my two younger siblings who are in primary school and my grandfather … We survive on my grandfather’s pension. I have lost count of how many times I have emailed and physically taken my CV to places, but not once have I even received a call back from the places I applied at. What’s sad is that I know so many people in my area who are dealing with the same problem,” said Gqozo.

The Real Jobs Summit and march comes in the build-up to Finance Minister Tito Mboweni’s budget speech on Wednesday.

Addressing the protesters as they sat on chairs outside Parliament, Pinky Langa from the Southern African Green Revolutionary Council accused government of failing to create proper jobs.

“We are always told about job opportunities, only to find out that they are referring to things such as the expanded public works programme (EPWP),” said Langa.

Langa said the EPWP was filled with uncertainty because contracts were not permanent and some workers get paid more than others, while some were not paid at all.

Langa said they termed it the Real Jobs Summit because it is run by people that are unemployed.

President Cyril Ramaphosa chaired the monthly jobs summit meeting on 27 January at the Nedlac Chambers in Johannesburg. In his State of the Nation Address on 13 February he said, “Through the Jobs Summit, we brought labour, business, government and communities together to find solutions to the unemployment crisis, and we continue to meet at the beginning of every month to remove blockages and drive interventions that will save and create jobs.”

Langa said, “We are not only discussing the issues of unemployment, but we are coming up with solutions and action plans, we are also looking at what kind of jobs people want. Government has no real plan about what to do with this crisis.”

After the march the campaigners returned to St George’s Cathedral and broke into groups to discuss solutions to the economy, climate change, unemployment and land reform.