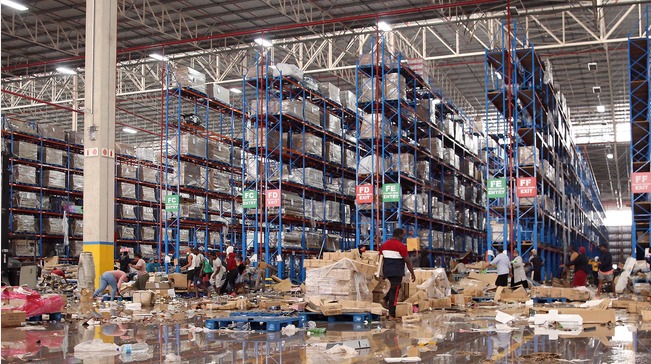 THE BUSINESS sector yesterday said it was concerned over lapses of national security and lack of consequence management following the July 2021 civil unrest, which cost the economy R50 billion and more than 150 000 jobs.

President Cyril Ramaphosa yesterday authorised the release of the report of the expert panel appointed in August to review the government’s response to the July unrest.

He will outline the first actions the government will take in response to the findings and recommendations of the report during his State of the Nation Address (Sona) on Thursday.

From July 8, 2021, for two weeks South Africa experienced a period of unrest characterised by violence, looting, destruction of property, disruption of economic activity, physical injury and more than 300 deaths.

The expert panel’s report expressed a strong view that “internal differences within the governing party contributed to the unrest”.

It said these “should be addressed as a matter of national security now” and that “intra-ANC arguments sparked the July riots”.

The report also listed a series of failures, from police being inadequately prepared to lack of intelligence from state security officials.

The expert panel’s report also found “that little has changed in the conditions that led to the unrest”.

“It is clear that frustration levels among South Africans were at an all-time high at the time that the violence broke out.

“Not only was the country being ravaged by a health pandemic, but the levels of poverty were being exacerbated by the hard-hit economy,” the report said.

South Africa’s unemployment rate in the third quarter of 2021 increased by 0.5 of a percentage point to 34.9 percent – the highest official unemployment rate recorded since the start of the Quarterly Labour Force Survey in 2008.

Among the report’s recommendations were that the government should pay close attention to the issues of poverty, underdevelopment and inequality.

“While we accept that the issues are top of mind, there does not seem to exist a clear plan, with budgets and a timetable, to effectively address this matter.

“If one adds the general unhappiness with corruption within the ruling party, many of the interlocutors that appeared before us warned that what happened in July will definitely happen again if these matters are not addressed,” it said.

Business Leadership SA (BLSA) yesterday said these issues identified in the probe into the July unrest were extremely disturbing for the entire country.

BLSA CEO Busi Mavuso urged the governing party to urgently address the issues highlighted to ensure the country’s future as a well-functioning and stable democracy.

“These findings should be taken seriously and considered in conjunction with the World Economic Forum listing the ‘erosion of social cohesion’ as one of the primary risks facing South Africa in its Global Risk Report,” Mavuso said.

Mavuso said the government had to find innovative ways to deal with economic growth, social strife and unemployment, which has risen to an all-time high of 34.9 percent.

“The best way to ensure social stability, given the high rate of unemployment and widespread poverty in the country, is for the government to accelerate its plans to stimulate the economy,” Mavuso said.

“This includes numerous reforms as well as rolling out the planned mass infrastructure programme.

“Delays in implementation mean the benefits are also delayed and this increases the potential for further social instability.”

“Workers expect the president to announce plans for his government to move away from economic policies that are suffocating the economy and that have left half the adult working population unemployed,” said Cosatu spokesperson Sizwe Pamla.

“We expect to hear about progress since the last Sona, in 2021, on government’s interventions to rebuild the state, tackle corruption, grow the economy, create jobs, and roll out the vaccines.”