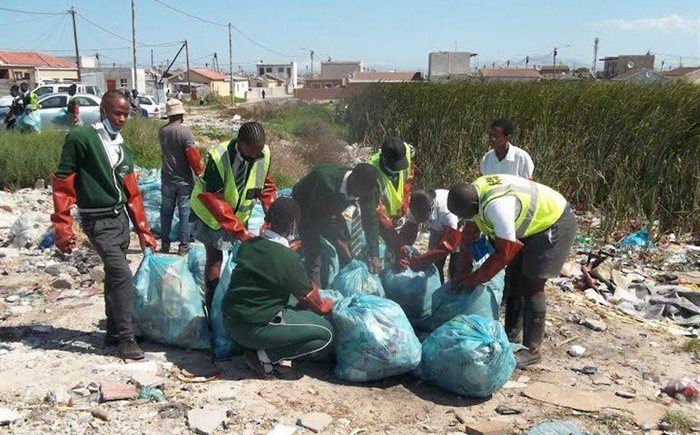 Activists from the Environmental Monitoring Group (EMG) and Bardale High School learners removed rubbish from a filthy wetland in Mfuleni, Cape Town yesterday as part of a recycling and clean-up project.
Mpumi Mhlalisi, a coordinator for Western Cape Water Caucus, of which EMG is a member, said learners who belong to an environmental club at Bardale High had asked him to organise the event. Residents and ward councillor Nkosiphendule Lombi were invited to participate.

Mhlalisi said the aim was to promote conservation and recycling and discourage illegal dumping.

Learners were asked to place glass bottles, plastic bottles, cardboards and papers in separate rubbish bags. “We teach the learners that residents are dumping something valuable and that waste material can be converted into a source of income,” he said.

EMG wants the ward councillor to allocate resources to keep the wetland clean, he said.

Aphiwe Mdunyelwa, EMG project manager, said EMG had first worked with geography learners from Mfuleni High School and Manzomthombo High School in 2019. “We now work with learners from six schools here and encourage them to take the initiative and see what they can do about pollution in their areas,” she said.

“Kids don’t have a playground, so they play here and get water-borne diseases. There are flies, and residents have to buy insect killers to get rid of them. If the wetland is clean, residents can even use the reeds to make reed mats and sell them to survive,” she added.

Ward committee member Marshall Fortuin said when residents missed the garbage truck they dumped rubbish in the wetland. This posed the risk of water contamination, he said.

“When the area is clean, we want to turn it into a community garden or a recreational park. We will discuss it with the City of Cape Town officials,” Fortuin added.

Asenathi Kofi, a member of Bardale High School environmental club, said rubbish in the wetland affected the school. “Residents burn rubbish here and smoke goes into our classrooms. Plastic bags from the wetland get stuck on the school fence and scatter in the school yard,” Kofi said.